Shaking hands is a greeting ritual that dates back to the early Neolithic period.  Apparently somewhere around that time people decided it was more appropriate than licking someone’s face to acknowledge a clan member.  There’s your fun history fact for the day.

This custom and its many variations have lead to some confusion after the advent of Instagram, but fret not!  We have officially been commissioned by The International Handshaking and Other Hand Gestures Council to construct a brief quick-reference guide to hand-humping.  It was a free gig.  We take what we can get…

Below you’ll find a list of handshakes that are internationally recognized by the council.  Please print this list and keep it for future reference in case you meet people not on Facebook.

This variation is an intimate one which involves a two-handed grab by one of the hand-shaking parties. 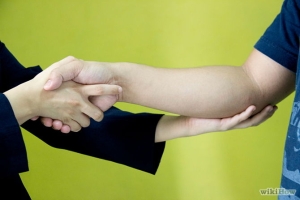 The Double Embrace is equivalent to placing your face next to somebody’s ear and softly blowing a Rod Stewart tune.

In the event that you find yourself hand-locked with a person whose fingers have the muscle density of wet spaghetti noodles, remove your hand and instruct them to lift more dumbbells and less Rubik’s Cubes.  Shaking hands with a Noodle Fingers is like shaking hands with a toddler, or a gerbil. 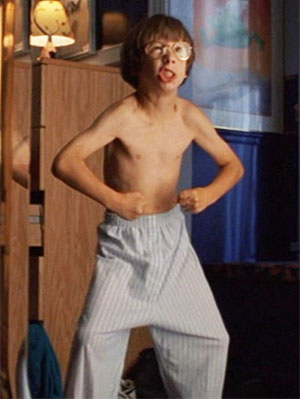 Buck up.  This is a time to match grips, not fondle raw eggs.

Don’t put yourself at risk for public humiliation and/or a broken hand.  Especially if you find yourself matched with the next grip on our list.

If the potential hand-shaking party is known to be a user of this cruel tactic, it’s socially acceptable to salute them instead.  Or just pretend like you didn’t see them at the party.

What is this, fucking Colonial America?

Let’s try this again:  when the webbings between pointer and thumb meet during the handshake, that’s the signal to close grips.  The object of the game is not to see who can grab the other person’s fingers first.  It’s a shady display of dominance.  Counter this haughty hand-shaker with a stiff hand chop to the side of the neck.

It happens to the best of us:  one party commits to the fist bump while the other is committed to a traditional grip.  After the awkward mashing of incompatible hands, it’s customary for the two parties to then break into a quick game of Rock, Paper, What Fucking Handshake are we Doing Here?

Do not ever approach a casual handshake opportunity with some fancy street derivative, as this could delay the meet and greet and create a scene.  Put your arm at a ninety degree angle, homie, and put ‘er there.

The only time a left-handed handshake is ever acceptable is if the right arm is broken or missing.  Otherwise, what galaxy cluster do you park your space bike on?

This is a right-handed society and we’ll pretend that little mishap didn’t happen. 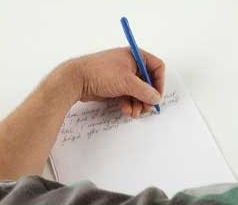 Here we have a man who was raised by wolves taking part in his first hand shake tutorial.  Sometimes it takes a couple tries.  Nothing wrong with a little improvisation.

It’s kinda like watching the runt of the pack trying to find a free nipple.