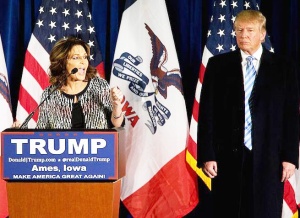 Donald Trump stands visibly uncomfortable while getting endorsed by Sarah Palin. I guess endorsement by Sarah Palin is probably like your own conception: you want it to happen, but don’t want to be there when it happens.

1) American Academy of Ophthalmology: “In his speeches, Donald Trump promises to be looking at a lot of things when he becomes president. Our organization recognizes and celebrates the utmost importance of looking at things, and supports any candidate who shares our values.”

2) Association of Bankruptcy Lawyers: “As people who have worked with Mr. Trump many times over the years, we are impressed by his perseverance and his ability to create hundreds of new jobs in many of our law firms. We believe that under Donald Trump’s leadership, America will enter a new chapter.”

3) Hair Club For Men: “Donald Trump cares about what’s important for our members. He knows all about growth, managing scarce resources, and his hair redistribution plan is just amazing.”

4) Mensa International Society: “Previously, we had required all applicants for membership in our organization to take an IQ test to prove their superior intelligence. However, thanks to Donald Trump, we have been able to greatly simplify the admissions process to simply look at prospective applicants’ Facebook comments mentioning Donald Trump.”

5) National Rifle Association: “Recent Trump’s comments that he could randomly shoot someone in the middle of a street and not lose votes prove that Donald Trump is serious about defending our constitutional right to randomly shoot people on the street.”

6) Donald Trump’s reflection in the mirror: “Look, I know Donald better than anyone else. I literally spend several hours every day with him. He isn’t some egotistical maniac people make him out to be. No, he’s the kindest, most selfless man alive – all he cares about is my needs and my wants.”

8) Donald Trump’s Ex-Wife Association: “The choice to support Donald was a difficult one for our organization and many of our members had initially opposed it, but we ultimately decided to endorse Donald Trump for president, because we can’t possibly rob America of this amazing sense of hope and happiness the country would be filled with as soon as Donald’s term is over.”

9) Coalition for Mexican Immigrants Rights: “You may be surprised that we chose to endorse Donald Trump after he had promised to build a giant wall on the border with Mexico. However, where do you think President Trump is going to find the workers he needs to build this wall?”

10) American Comedian Guild: “Did you hear the joke about Donald Trump? Well, we got about a million more of them, and we’re not going to run out of them until at least 2025.”

An Ostensibly Funny Commentary* of the Recent News and Events. (* warning! may not actually be funny or a commentary. Also, since I am not quite sure what "ostensibly" means, it might not be "ostensibly" either.) Blogging at listofx.com