That's right, America. The Twinkie is back! (for some reason) 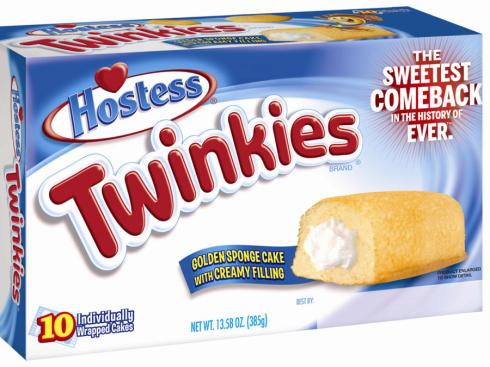 Assumed by many to be the unholy result of a secret Nazi project codenamed either Twinkilnauss or Angelfoodensch, the Twinkie has been a staple of American households for decades. Created in 1930, Twinkies were a way to utilize the angel food baking machines made seasonally dormant when strawberries weren’t in season. Instead of filling them with fruit, the cakes were filled with banana-flavored cream, put onto shelves and became an instant success. Due to the WWII rationing of bananas  (which, apparently, was a thing), the cream filling inside Twinkies was given the vanilla-flavor that we know today. So, there you go, a brief history of Twinkies. But nowhere in that Cliff Notes version do we get an answer to the question: Why are Twinkies so popular? 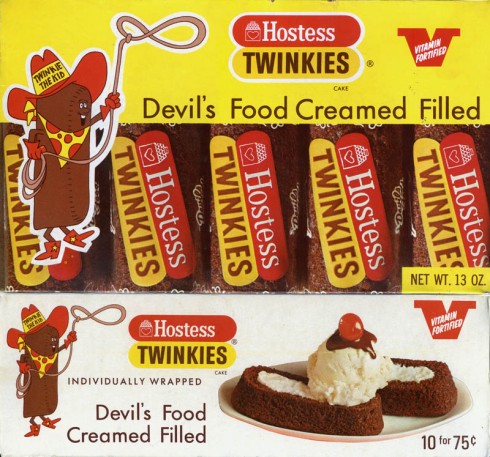 Yes, it is safe to assume that this Twinkie incarnation didn't sell well in the segregated South.

Today, they are deep fried, baked into casserole dishes for elaborate desserts and

coveted by kids all over. Twinkies are considered as much a part of America as high fructose corn syrup and applie-flavored fruit pies. After Hostess entered into bankruptcy, the inevitable disappearance of Twinkies was seen by many as the end of an era, a sign that an economic apocalypse had indeed begun.

Now, the recent return of the Twinkies to grocery store shelves was seen as the second coming of a corn syrup-laden messiah, a chance to wrap one’s hands around all of the nostalgia and Americana that could be crammed into a tiny snack cake.

What about Twinkies makes them so popular, though?

They aren’t particularly tasty (unless ‘stale’ is a flavor), they have a longer list of ingredients than napalm and god help anyone who drops even the smallest piece onto an article of clothing because it will leave a near transluscent stain that can only be removed by an industrial kiln and a little witchcraft.

Is it mascot Twinkie the Kid? The anthropomorphic Twinkie whose mission in life is to sell out his own kind? Is a self-loathing Twinkie really the best mascot to sell cake to kids?

Honestly, I have no idea why Twinkies are popular. What exactly are we welcoming back into the folds of our culture?

Included in these 39 ingredients:

– Artificial vanilla flavoring derived from petroleum (harmless, all natural petroleum. Imagine, if you will, the Keystone Pipeline bringing all of that vanilla cream directly to your belly!)

– Corn dextrin (Wait a sec? Is that the same corn dextrin that makes the delicious glue on envelope seals? It sure is!)

– Cellulose gum helps to create the filling’s sheen (it is also an active ingredient in jet fuel, which explains why you got hungry the last time to passed a plane crash)

– Other mouth watering ingredients include: Polysorbate 60 (sweet, sweet, Polysorbate), Hydrogenated Shortening (that’s the stuff…), Yellow #5 (whoa mama!) and Red 40 (because anyone using Red 39  is an a-hole!)

Of course, no Twinkie would be complete without the 3 C’s, that ol’ fashioned American Trifecta: corn syrup, high fructose corn syrup and, you betcha, corn syrup solids.

“So, does anyone have any idea how to dispose of all of these chemicals? Professor Twinkie, what are your thoughts?”

Mmmm. Just reading those ingredients off will make anyone drool like a Pavlovian dog.

Once again, Twinkies are being orally embraced by the general public and Hostess has hyped its return with a marketing campaign steeped in an overblown sense of self-importance. “The sweetest comeback in the history of EVER!”

Again, why? Why do we welcome back Twinkies like some war hero who’d been presumed dead? “Private Twinkie, for singlehandedly regaining control of Fort Crapfood and defeating the waistline of Hermann Goering, we salute you!”

Are we really welcoming back the actual Twinkies or are we celebrating the return of the nostalgia that the Twinkie brings with it? After all, ads for Twinkies were placed into comic books where they were masked as storylines. The Penguin cripples Gotham by hoarding the city’s Twinkie supply? Hulk is able to regain his ability to crush enemies thanks to his devouring of Hostess treats? Christopher Nolan plots they are not, but they ingratiated themselves to our tinier selves because there were our heroes eating the same crap we did. Flash, Hulk, Iron Man, every superhero now drew back the curtain on the source of their superpowers: Polysorbate 60 and Corn Dextrin!! 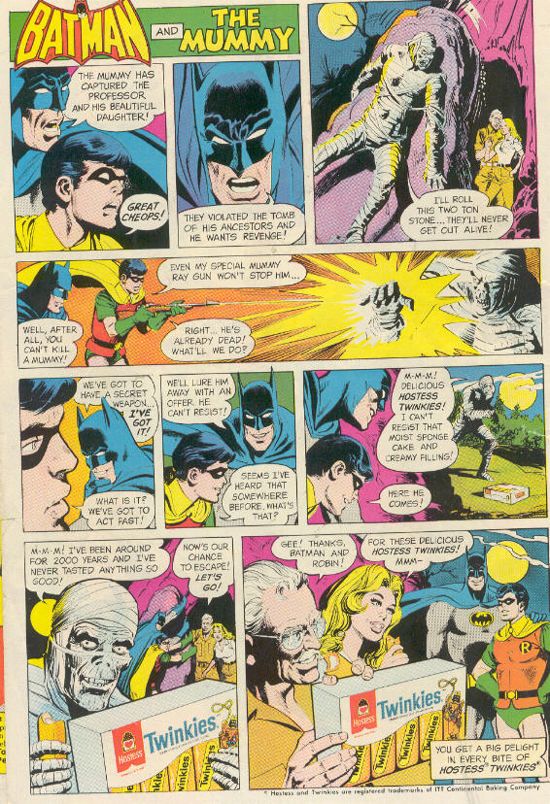 Twinkies, the perfect plot point for all Batman vs. Kidnapping Mummy storylines.

So, welcome back, Twinkies!

Personally, I don’t get what all of the hoopla (or even hubbub) is about. I’ve never been a fan of Twinkies. Still, I don’t want to be rude, so I will wish them a friendly welcome.

And welcome back to the love handles that will no doubt be spreading out from Batman’s body suit.

A writer who is living the dream. It's unclear whose dream it is, though. Stay tuned.