(Read these first two lines in a David Bowie voice, like at the start of the song: Modern Love)

I didn’t care that the Twinkie went away.

I didn’t care that the Twinkie came back.

I’m not oppose to the Twinkie, although I think Peanut Butter Crunch Bars are much, much better.

In the movie Zombieland, Woody Harrelson’s character should have been on the prowl for Peanut Butter Crunch Bars instead of Twinkies.

If you need to pause and watch the movie so you know what I’m talking about, I’ll wait here. Go ahead.

What did you think? Pretty good, huh?

I would take a Twinkie over a Moon Pie though. Not a big fan of marshmallow, and when you take a hard chocolate shell and stick it over a marshmallow, well then your asking for it to be left on the grocery store shelf un-purchased.

S0 now that everyone has seen Zombieland, remember when  Woody Harrelson stumbles upon an overturned  Hostess truck thinking it’s full of Twinkies. He is super happy until it is discovered that  in fact it was full of Snoballs. 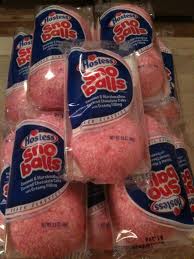 Coconut is really hit and miss with a lot of people. It’s a definite hit with me, except in drinks. Give me Mango anything in a drink, but not Coconut please.

Anyway, if Woody Harrelson discovered a truck full of Peanut Butter Crunch Bars I’m sure he would have been uber-ecstatic. On the downside though, the Peanut Butter Crunch Bar would have probably melted in the back of the truck, while the Twinkie can last damn near forever in all sorts of extreme environments and even nuclear war, Mars, or the sets of Reality TV shows.

Or any of these Hostess guys for that matter:

You don’t see them anymore. Where are they now? Washed up in some snack retirement home…looking forward to Jello Pudding Thursdays? (Is that borderline cannibalism?) Getting cellophane wrapper sores from neglectful nurses? Wishing their Grand kids would visit? Or maybe thankful they don’t since most kids love snack cakes…

I think a lot of people were initially upset over the disappearance of the Twinkie, not due to the tasteless cake it’s self, but more due to the aggressive marketing campaigns of Hostess from our youth. My favorite being the advertisements in the comic books disguised as comic book panels. 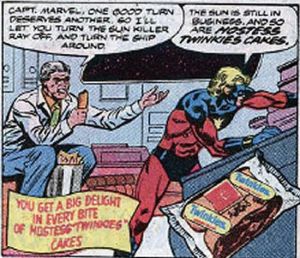 Do these tights make my package look bigger…because that’s what I’m going for….

Twinkie the Kid worked with all the greats: Batman, Spiderman, Aquaman, Plasticman, Hulk, The Kardashians, Archie and Jughead…. 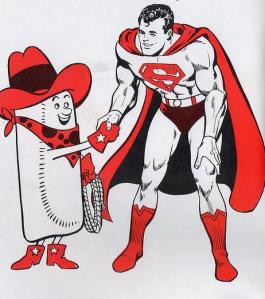 If you liked this nonsense make sure you subscribe to Long Awkward Pause to get seven different views on one subject. That’s like seven Twinkies for the price of one! Also subscribe to everyone’s individual blog, especially mine here.

58 Comments on The Incredible Edible Twinkie