One fun annual event you might be unaware of is the Oxford English Dictionary's release of new words. This announcement always entertains. At the same time, it can be frightening because you can think of it as a thermostat of how fast we're dumbing the hell out of ourselves. Srsly. But on to the awesomesauce! You can read the entire list on the OED web site, of course, but here's some of the juicier highlights:

Awesome, with a hint of bacon

Awesomesauce – Finally included after my long-standing campaign to include this… awesome word. Used to superlatively describe anything that is inherently awesome, such as bacon, beer or aliens taking your ex. 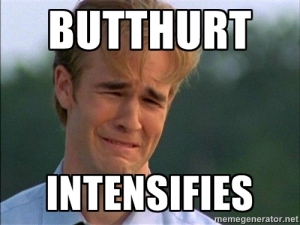 Nobody should see men cry

Butthurt – This great term puts just the right emphasis on bent or torqued feelings. It adds a mocking sense to someone’s disenfranchisement that is simply hilarious.

Deciduous Tooth – I have no clue what this means. I also had no idea there were teeth that fell out every year, as opposed to the coniferous teeth, which are longer, thinner and never fall out… I guess.

Fap – LOLZ… Because you can never have enough different words for this, really.

Hangry – And it’s about damn time this word became official. Now we can move on toward making this phenomenon a legal reason for divorce, riots, warfare and internet troll battles.

Internal Rhyme – Apparently this is what happens when some hipster poet-wannabe has a song or poem in their head that to them, sounds epic and lyrical. Once written down, it rivals the best kindergarten twaddle generated in fingerpaint that decorates refrigerators around the world. 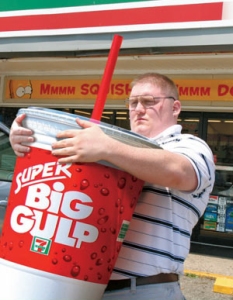 Much sugar was sacrificed to bring you this swill

Interstellar Medium – This new term was adopted from your favorite American fast food chain, who have steadily upscaled their drink menu offerings. This size falls in between “Local Cluster Bucket” and “Known Universe, with a Straw.”

Mx – I’m told this may be used in place of Mr., Mrs., or Ms. for those of us who are gender-confused. Alternatively, it also supports the LBGTQRSTUV community, who absolutely must come up with a category for every conceivable sexual orientation.

OMG! I like, totally live for pumpkin spice! But make mine a ‘skinny’

Nanosized – Similar to ‘Interstellar Medium,’ this term applies only in Starbucks. The dessert-in-a-cup purveyors needed a new, confusing-sounding term for skinny white girls in Uggs who want to spend $22 on a coffee drink without coffee.

You know this is a metaphor GIF, right?

To Go Down – Really? I think the fact that it took this long for OED to include ‘to go down’ explains a lot about why men and women often don’t get along, and also why we have to have the word, ‘friendzone.’

Thanks, Hipster Douche, for making everyone smell like a red car Christmas tree

Vape – This new word describes the act of using a funny box with a battery to superheat some mystical sludge to prepare it for inhalation. This replaces smoking a la e-cigarettes. Vapers are people who believe that their cloying, sickly-sweet floating bog of Strawberry Surprise Bubblegum is more acceptable to you than a big, fat Cuban stogie cloud.

Entertained? Great! No? Nuff said… that’s a new one too, and we like it.

A former career Soldier and hired gun, BrainRants has been angry everywhere. Known for his bubbly personality and ill-formed thoughts, he's elevated swearing to an art form. Famous for being as blunt as a 2x4 straight to the teeth. Bacon lover, beer expert and inventor of new words. Occasionally pens Sci Fi and Military Thrillers.

12 Comments on Word Has It