I was in a dimly lit and small night club located off the main downtown drag...like seven blocks off to be exact. I'm pretty sure it was a Steak N' Shake before someone decided it should be a club. A small stage stood against the back wall. It was wooden and oddly shaped. The owner's brother-in-law probably had a hand it slapping it together. Two desk lamps were attached to two oscillating fans at each corner of the room, and these acted as the stage lighting. There was nowhere to sit.

This was a standing room only place…unless you count the toilets as a seats. Then there would be a total of two seats in the joint.

The place was crowded, which for this establishment meant about 30 people.

The bar area, which probably was once the check out counter, was clean enough. They only offered Bud Light, Michelob Ultra, and some unknown Spanish Beer whose name I could not pronounce or spell. I went with that one. It was served with an avocado slice.

The crowd was in good spirits and gathered around the stage. One big, hairy, sweaty security guard stood near the front of it, in case we all lost our ever loving minds at seeing Mac Sabbath play live, and decided to bum rush the band.

A guy standing next to me, also drinking the same Spanish beer, turned and whispered,

“Is this your first time seeing Mac Sabbath?”

“Yes,” I whispered back. “Why are we whispering?”

“Because I am so uber excited!” he hissed back…except when he said the word ‘excited’. He practically screamed that word. He spilled a little of his beer and his avocado slice dropped to the floor.

“Bummer!” he said and made his way back to the bar to get another one.

A flash of light and smoke suddenly filled the room as the band appeared on stage. Ronald came out first, the lead singer. He was dressed in full Ronald McDonald attire…well if Ronald McDonald fused with the IT clown and then fused with Steven Tyler of Aersosmith. Mayor McCheese with tusks coming out of his hamburger face was on guitar. An evil, constipated Grimace was on bass, and the Hamburglar in Peter Criss Kiss makeup was on drums. They immediately ripped into their version of Iron Man. It was reworked as Frying Pan.

Sadly, I don’t know a lot of  Black Sabbath songs, but I’m pretty sure all the other numbers were parodies of original Black Sabbath music as well.

One thing I did know, was that I was very hungry after the show. 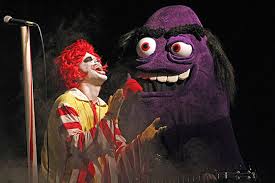 The band was very energetic…well Ronald was…Mayor McCheese and Grimace just sort of stood there. I really can’t blame them. One is playing the guitar with a giant hamburger on his/her/its head, the other in full head-to-toe purple Grimace costume. I missed exactly what happened, but at one point Ronald was holding his boxers over his head.

I think my favorite part of the show was the remote controlled Fry Guy.

I miss the Fry Guys.

Why did McDonald’s get rid of these characters anyway?

I don’t know how long the show lasted. It was a quick rapid fire musical pace, much like the real Black Sabbath might be, just without all the clown makeup and evil Grimace head looming over the crowd. After the set, I made my way backstage…and by backstage I meant the former restrooms. There was a greasy looking guy standing there, guarding the door. He was in a black leather vest and wore one of those Irish hats that the lead singer of AC/DC used to wear.

Me: Excuse me…are you the manager of Mac Sabbath?

Manager: Yes. Who are you?

Me: My name is Christopher De Voss. I’m with the online magazine, Long Awkward Pause. We are a humor magazine. I was wondering if I could get an interview with Mac Sabbath?

Manager: I’m sorry. Who are you?

Manager: You are a funny magazine? Like Cracked? Do you read Cracked? That’s some funny shit right there!

Me: Um…yeah. I have read Cracked. I generally don’t read the competition though. Any chance of an interview with the band for the website?

Manager: Do you ever read College Humor? I’m not in college, nor have I ever been, but that’s some funny shit right there!

Me: Yes…I don’t think you need to have ever been in college to enjoy them.

Me: Sort of…kind of…not really. We have a podcast. Maybe your guys want to be on the podcast?

Me: No. It’s a real studio. We have had some big names on there…like Kevin Spacey.

Me: Kevin Spacey? House of Cards?

Me: OK. Never mind that, here is my website. Take a look. See what you think.

I hand over my phone with the website loaded up.

Manager: I like that Ned guy. He is funny. Are you Ned?

Me: Well, thanks for your time anyway. 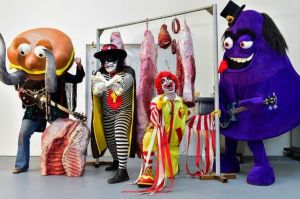 I exited the club without the interview. I was feeling a little dejected. Also a little annoyed. The show was enjoyable for what it was. I’m not sure how much life Mac Sabbath has…they may need to branch out a little bit. Maybe mix Burger King and Guns & Roses? Wendys and Primus? Taco Bell and Garth Brooks?

There was a band in the 80s or 90s…I can’t remember which decade exactly…that had a brief run doing Led Zeppelin covers with an Elvis impersonator as their lead singer mixed with a reggie beat. They were called Dread Zeppelin. Incredibly awesome, yet I don’t hear much about them today. Here’s hoping Mac Sabbath can find a long and happy meal of a career, even if they don’t do interviews.

Check them out here:

7 Comments on I Was Denied An Interview With Mac Sabbath