Now that Long Awkward Pause has hit the big time…and by big time we mean ALL of our Moms now read it…we have stock piled a mass of things to give away.

(Big thanks to my Mom for finally jumping on board. She was the last lone hold out.)

(Some of you would even be on board to receive a free STD. Maybe next contest.)

For this giveaway we partnered up with Grail Games:

Grail Games is a small board and card game publishing studio located in Sydney, Australia. We have been honored with the task of coming up with a some great way to give away this card game: 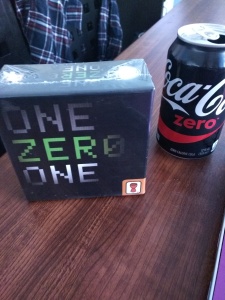 One Zero One is a very simple, very fast, very fun, and a very store-able card game. It is also created by David Harding who may or may not have been close to a certain former staff member…a staff member who used to fling their own poo whenever one of their articles was cut. We are not naming any names here…but…let’s just say it was just bananas.

Here is a video of some random guy describing the game:

That guy is also really good with chalk. We emailed him and thanked him for his tutorial on the game and also told him we would watch a YouTube channel of him drawing and erasing pictures using chalk.

He has not responded.

The game has been in the prize/janitor closet for months only because no one…meaning mostly me….could figure out a really great contest in order to give away this really great game.

My first thought was to tap someone on the shoulder and say, “Here you go.”

But Grail Games and the management of LAP wanted something a little more creative.

While I was racking my brain on how to give this game away,  another problem happened. Some other companies also wanted us to shamelessly promote and give away things for them too. The prize/janitor/Narnia closet got fuller.

(Yes! Yes! We know Narnia was through a wardrobe, not a closet…but just go with it for humor’s sake!)

I’m not cleaning this out

Our janitor got so pissed that he took a piss in the mop bucket, in front of everyone, gave us all the finger, and then quit. I personally never liked how he would rearranged my collectible Star Wars figures on my desk into Karma Sutra positions every night after I left the office.

I can do that myself. I don’t need the help. Thank you anyway!

We will miss you Mr. Odolf. Good luck, you Star Wars perv.

So here is the deal…no one in the office can come up with a good way to give away any of this stuff. Well…Mr. Odolf had a good idea…or so he said…before he mooned everyone on his way out the door. (Problem is…he couldn’t get his jumpsuit back on after the dropped it. It’s still laying on the floor. No one ever knew he didn’t wear any underwear underneath of it. What does that say about Mr Odolf?)

Here is your chance to help us and win One Zero One all in the swoop! In the comments below, tell us what you think would be a really cool contest for someone to win something off a web site such as ours. The contest can either be legitimate and fair or completely unrealistic, made-up, and unattainable. The more creative, the better.

The person who comes up with the best contest…wins this contest!

Clear as lyrics to a Puddle of Mudd song?

What happened to Puddle of Mudd anyway?

If you spell Mudd with two Ds does that make it cooler?

Contest closes May 6th. Winner will be announced May 9th.

15 Comments on Win One Zero One The Card Game!