Even though it made $94 million its opening weekend and your one friend who knows a little too much about the Marvel Universe has been begging you to see it, you may still be on the fence about shelling out ten bucks for a ticket and forty dollars on concession stand goods to see Guardians of the Galaxy. Your skepticism isn’t unreasonable, but if you don’t see Guardians of the Galaxy, you’re going to be that weird person at parties who people don’t know how to act around. You’ll be missing out on talking raccoons, Groot, and amazing music. Below are the only seven reasons you need to be convinced seeing Guardians of the Galaxy is absolutely necessary for pop culture survival.

Ever noticed how most Marvel heroes seem like the kind of douchebags who’d be ordering fancy craft beers at the bar with a pompous demeanor that screams, “I’m too chiseled and handsome to realistically entertain your flirting even in fantasy mode”? Well, Chris Pratt’s Peter Quill totally isn’t that guy (…okay, except maybe for the Star-Lord nickname part). He’s approachable and funny, and even though he may have some major mommy issues, you can tell he’s the kind of guy who’d win you an obnoxiously oversized teddy bear at a carnival.

Zoe Saldana is always at her best when her skin tone has been altered, just think back to Avatar. Her greatest success as an actress with her normal skin tone was when she played Kit in the Britney Spears classic Crossroads.

By the way, yes that is Pennsatucky from Orange is the New Black starring in Crossroads, too.

3. Vin Diesel isn’t driving a car or protecting any children.

Vin Diesel plays the role of Groot, who’s essentially a big tree man edited with enough CGI that you can’t even tell that it’s Vin Diesel. For most of the movie, Groot repeats the same three words over and over again, which is really perfect for Vin Diesel’s range as an actor. In fact, Guardians of the Galaxy might be Vin Diesel’s defining role. (Side note: If you cry during the “We are Groot” moment, you aren’t alone. Here’s a support group to help you deal with your feelings.)

4. There’s a raccoon in it that you’ll hate substantially less than the one(s) tearing up your garbage.

Normally raccoons are awful creatures that look like a disgusting inbred mixture of a lemur and a fox, but Rocket, the raccoon in Guardians of the Galaxy (voiced by Bradley Cooper), isn’t so bad. Any sentient vermin that encourages people to steal prosthetic body parts is just fine in my book. Plus, maybe there’s a magical frog/prince raccoon/sexy actor thing going on, and if you kiss Rocket he turns into Bradley Cooper. 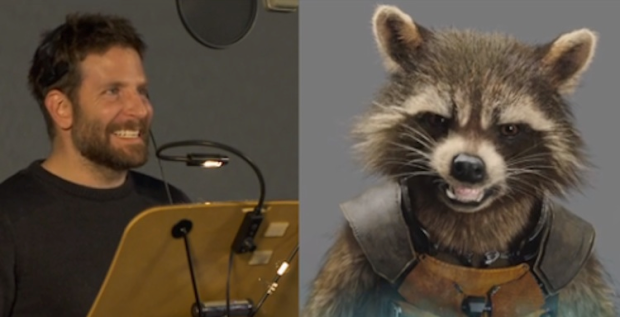 It’s common knowledge that Dwayne Johnson, also known as “The Rock” and “The People’s Champion,” and Stacy Keibler managed to leave the shame of their “professional wrestling” careers in the past to become legitimate celebrities (…or date one), but when did Batista (real name Dave Bautista) join them?! He plays some tattooed dude in the movie who has a few funny lines, but who cares who he is because we all know he’s really good ol’ Batista: the longest-reigning World Heavyweight Champion in WWE history with a really original belly button tattoo! (I had a brief WWE phase that lasted from 1999-2000. And apparently that returned just now in 2014.)

6. It makes The Avengers look like a bunch of tools.

This is debatable, but the characters in Guardians of the Galaxy felt approximately 70% more likeable than those in The Avengers. By comparison, it’s pretty clear that the draw of The Avengers is the various powers they have and not how dazzling their personalities are (we’ll exclude Tony Stark from that statement). The characters in Guardians were so much more relatable, and that made the whole film feel like it was more than the average comic book action flick with predictable explosions, heroics, and Easter eggs you catch understand unless you’re a mega nerd.

7. The soundtrack will give you life.

The soundtrack to Guardians of the Galaxy basically has all the best songs from the ‘70s that you might have forgotten existed (possibly because you weren’t even close to being alive then). It features “Hooked on a Feeling,” “Come and Get Your Love,” and last but not least, “Cherry Bomb.” I know it might be hard to believe there was  good music before Nicki Minaj’s “Anaconda,” but this soundtrack is all the proof you need.

And let’s not forget,

No matter how many abs he has now, Chris Pratt is and will always be Andy/Burt Macklin deep down: