Every generation a movie comes out that helps define an era. My grandparents had Gone With the Wind, my parents had American Graffiti, and this generation we have the one movie to put all other movies to shame… 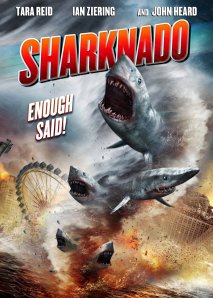 Not since Jaws, has a movie completely captured the true nature of sharks in their never ending quest for human flesh. It’s no secret why sharks don’t make for good pets; because they will eat you.

For those who reside in the Los Angeles metropolitan area, Sharknado hits a little too close to home. With the constant threat of The Big One looming in the back of every resident’s mind, the thought that a waterspout could spew thousands of sharks into the city is a very realistic fear. Not only is Southern California one quake away from breaking off from the continental U.S. and falling into the Pacific Ocean, but now simple and enjoyable things like going to Santa Monica put one’s life in danger from flying fish with teeth.

Ian Ziering’s gratuitous acting is flawlessly matched by Tara Reid’s underacting in a casting decision that can only be described as sheer genius. In combination with the bikini clad Cassie Scerbo wielding a shotgun for 47% of the movie and you have a recipe for nothing short of cinematic greatness.

Not since Showgirls has there been a movie that makes you stop and think, “What am I doing with my life? Pass me the Jack Daniels.”

But we live in a very special time. A time in which lighting does strike twice. Case in point… 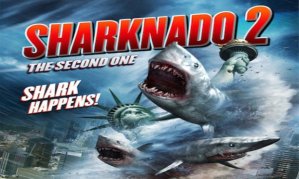 Because Sharknado wasn’t epic enough, we’ve been blessed with Sharknado 2. Please stop and take a moment to revel in knowing you are worthy of such excellence.

Take this movie for what it is; a warning that no one is safe from air born Great Whites. Be entertained but also learn from it and use it an educational tool. Or a drinking tool, whichever you find to be more appropriate.

So, on July 30th, when Syfy releases the long awaited sequel, I plan on spending the evening with those I love. We will be living in the moment and taking a shot every time Ian Ziering saves a baby. We will pay close attention to the subtle nuances of Tara Reid’s acting and more than likely end up lighting some shit on fire.

Miss Melisa Mae is an avid fan of anything Chuck Norris and vodka. If she could meet Chuck Norris while drinking vodka, all the better. She has a B.A. in B.S. and likes referring to herself in the third person because it makes her feel special. Her mother may or may not have dropped her as a baby.