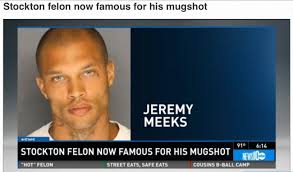 What does it take to get your 15 minutes of fame on the internet?

Apparently some baby blue eyes and five counts of weapon possession and one count of gang related activities.

Jeremy Meek’s mugshot went viral after the Stockton Police Department released his mugshot on Facebook. Who knew the police department was so into keeping up with status updates?

Do they take pictures of the doughnuts they are eating for Instagram?

Was that last joke too obvious?

Maybe so, but Jeremy Meeks has gained instant celebrity as the “McDreamy Convict.” It is even rumored that he is to be offered a modeling contract and a reality show.

Not since Orange Is The New Black has an arrest record been so profitable.

While the ladies are getting their panties in a twist over this multi-convicted felon, we are lucky to have the power of the internet and some guys with a bunch of  free time and a meme generator to put it all back into perspective.

Katie: This is the first time I’ve thought sexy mugshot guy was actually sexy, and that’s only because he’s next to Ben Stiller.

BrainRants: I’m too hetero to comment on the sexiness of either guy, real or imagined, but if I had to, I’d pick Stiller because he’d get his junk zipped up and I’d be off the hook.

Ned: Before he knew he was sharing a cell; after meeting his cellmate, “Three-legged Jack.”

Monk: No idea what this is about.

Jack: I do not actually have three legs. They gave me that nickname because of my enormous penis.

Omawarisan: Like Derek Zoolander, I can only turn to my right. I’m not sure how that applies here. Let me get back to you.

Katie: If only he had stolen someone’s tattoo removal system to erase that teardrop.

BrainRants: I’m too hetero to comment on the sexiness of either guy, real or imagined.  My junk is bigger and better than this lowlife’s.  Word.  I need no gang tats to proclaim my body count… I don’t have enough face for that.

Ned: “Steal” is such a harsh word. I think “borrow” is better. You know, like they say in prison: “Hey, I’m gonna borrow Teardrop Boy tonight…”

Monk: Who is this guy?

Jack: Why do I have “Tears of a Clown” by Smokey Robinson going through my head?

Omawarisan: Does anyone think my photo would go viral if I touted my lack of disfiguring tattoos and my clean arrest record?

singlegirlie: He can steal my panties, too. The good ones, even. 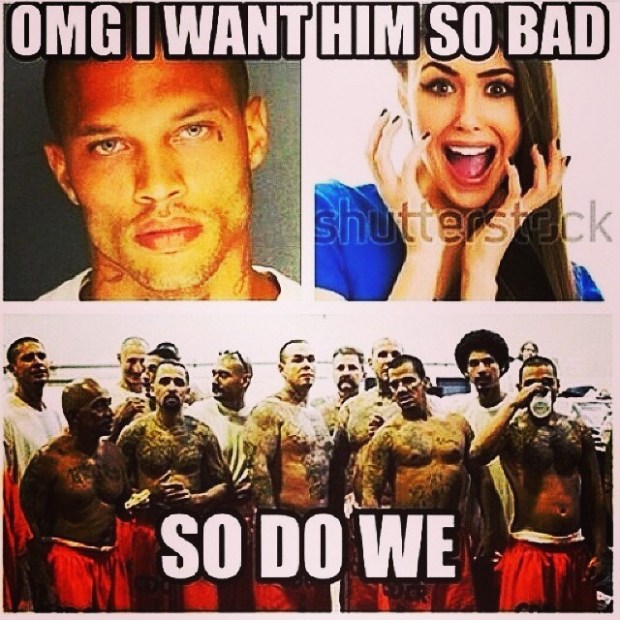 Katie: They might not want him after they see this.

BrainRants: I’m too hetero to comment on the sexiness of either guy, real or imagined.  To the girl who posted the original pic: You can fuckin’ have the felon. Enjoy y0ur prison sex alone time.  Ditz.

Ned: According to a prison spokesman, Meeks is doing fine. Apparently he is working in the cafeteria, because the spokesman said he spends most of his day “tossing salads.”

Monk: Hmm… Something about Shutterstock?

Jack: Orange is the new holy crap that dude is gonna get raped.

singlegirlie: HEY! Meeks is my bitch, bitches! So BACK OFF. Don’t worry, Justin Bieber will be there shortly.

BrainRants: I’m too hetero to comment on the sexiness of either guy, real or imagined.  Also, there is nothing remotely attractive about our liberal-ass First Lady, either, but I like and respect her relaxed ‘do.  Still, I wouldn’t want to hear about it while I upstage “B” in bed.  Just sayin’.

Ned: I’m sure there’s a presidential pardon already in the works. I’m just not sure the president knows about it.

Jack: Why is the First Lady calling him a girl? Is it because of the gang raping he received?

singlegirlie: Michelle, girl, don’t do it. You got a good thing going there with the POTUS, don’t screw it all up with ol’ blue eyes. NOT TO MENTION I WILL CUT YOU.

Katie: Calvin and I are on the same page about the teardrop tattoo removal.

BrainRants: I’m too hetero to comment on the sexiness of either guy, real or imagined.  I have a 9mm teardrop solution for this felon. Asshat.

Monk: Once I had Calvin Klein sunglasses but I lost them. They cost $80, but I think I got them on sale.

Omawarisan: Lipstick on a pig, Klein on a turd.

singlegirlie: JEREMY WHY HAVEN’T YOU CALLED ME YOU’RE SUPPOSED TO GET ONE PHONE CALL AMIRITE? 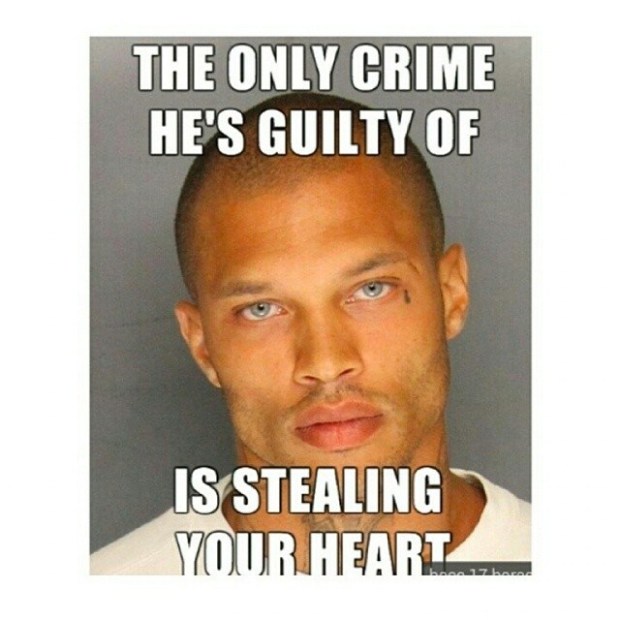 Katie: And making some poor tattoo choices for which baby blue eyes can’t even compensate.

BrainRants: I’m too hetero to comment on the sexiness of this guy, real or imagined. Gangsta, so shoot him.

Ned: Someone should probably check on that potato peeler he stole from the cafeteria, too.

Monk: Need some help. Is this an American thing?

Jack: He stole your heart and then ate it with some fava beans and a nice chianti.

Omawarisan: Yes ma’am, and the only thing you’re guilty of is deluding yourself.

singlegirlie: I’ll wait for you, Boo! Did you put in the conjugal visit request? I’ll wear the thigh high boots and Chanel No. 5. (And oh the ail-nay ile-fay will be hidden in a secure place).