It’s no secret that the rest of the world is not all that fond of Americans; it’s somewhat rightly deserved. American’s are proud. We are even proud of things we should not be proud of, like the fact that we are #1 in obesity, or #1 in daytime talk show drivel, or even #1 in bacon memes.

But to us, all that matters is that it has a #1 in front of it. It’s the competitive nature we share. If we can’t be number one in it, we just kind of ignore it, or call it bad…like soccer.

Despite that trait, one could argue that what is really cool about America is all the diversity. The rest of the world can not argue with that. From the west coast movies and desert, to the south with it’s speciality cooking and flavored moonshines, to the midwest farms and teen angst, all the way to the northern big metropolitan cities and lobster dishes.

Anyway… even if you hate America, we have Disney World…and we know you don’t hate Disney World. We actually have two of them. We have the most Disney Worlds. We are #1 in Disney World ownership… 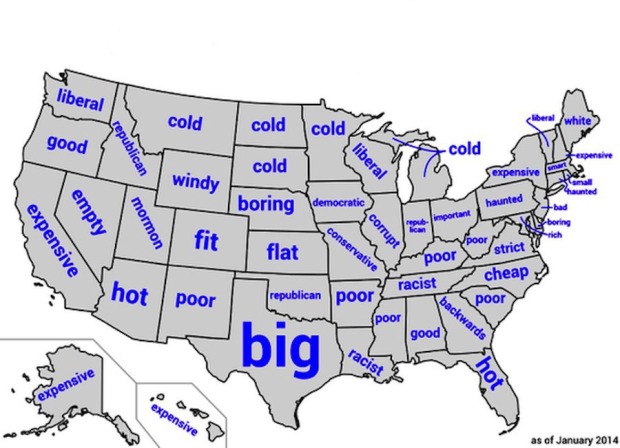 Chris:  “Saying Florida is hot is like saying the sun is hot. Duh. Little known fact, the sun vacations in Florida.”

Omawarisan:  “South Carolina is poor, but they have a cable channel that shows The Dukes Of Hazzard 24 hours a day. I’m not saying that’s good, I’m just saying it.”

Rants:  “Currently in Kansas, I just can’t argue with flat, which I’d say beats the shit out of Nebraska’s boring.”

Katie:  “Look at all those poor, cold, and expensive states! Corrupt has never looked so good.”

Chowderhead:  “Nevada is spot on.  That’s what my checking account balance reads every time I leave that state.”

2.  What Brand is this State known for?

Chris: “I’m from Ohio. I am so proud that we are known for lotion and rubber.”

Calahan:  “I’m from California and that infographic of the state is literally what our state looks like from space.”

Omawarisan:  “There is a race in NC where people run two miles to a Krispy Kreme, eat a dozen donuts and run back. People in NC throw up a lot. A LOT.”

Rants:  “God I love Colorado.  Do you know how much it cost to have a copper tap run 400 miles across Kansas to my kitchen?  Holy crap.”

Katie:  “I’m learning so much about the state of Wyoming today.”

Chowderhead:  “It’s by no coincidence that all the brands that nobody’s ever heard of are popular in the states that nobody lives in.”

3.  The Most Popular Actor From That State…

Chris:  “The best that Washington can do is Rainn Wilson? Really? That’s like having your state be famous for Wilford Brimley…oops…sorry Utah…”

Calahan:  “Woo-hoo! We got Tom Hanks! Does that mean we get Colin Hanks, too? It does? Yeah… that’s cool. Sure.”

Omawarisan:  “West Virginia, Steve Harvey is an actor? When did that start? I’m still waiting for him to be funny.”

Rants:  “Well, at least I can drive to Iowa in a few hours.”

Katie:  “My elaborate fantasy that Harrison Ford was from Indiana just died.”

Chowderhead:  “Burt Reynolds sounds like a gas grill brand.  And look, Brad Pitt is pointing at Neil Patrick Harris in this photo.”

4.  What do British people think about your State?

Jack:  “Even though Game of Thrones is filmed in Northern Ireland, the British think that the White Walkers reside in Alaska. I’m also a little confused by the “Giant Heads” thought around the area of Iowa and Nebraska. Otherwise they’re spot on about everything.”

Rants:  “Except for the ‘Giant Heads’ thing, surprisingly accurate.  Love the Gulf Coast ‘fucked up shit.”

Katie – “OK, “Sufjan Stevens album” isn’t too surprising, but I am intrigued that British people are more familiar with Slipknot’s origin than I am.”

Chowderhead:  “I don’t even know what hemisphere British people live in.” 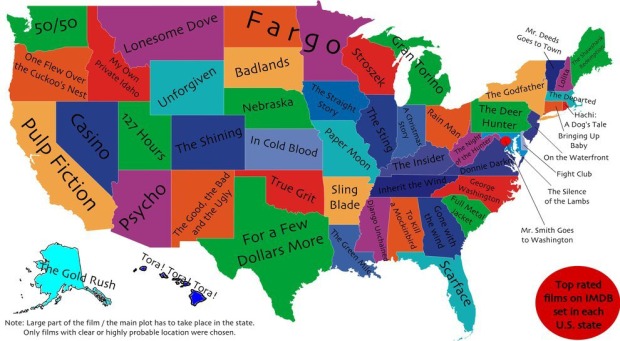 Calahan:  “Poor Hawaii. They’re best known for getting their ass kicked 70 years ago. What about surfing? Hula dancing? The Brady Bunch and cursed tiki?”

Chris:  “Sadly Ohio…Kmart went bankrupt…where are you going to get your underwear now, Rain Man?”

Omawarisan:  “Was My Own Private Idaho a song or a film first? And what benefit is there in having an Idaho?”

Rants:  “How awesome is it that Fargo won two states?  Also, Oma, one word: ‘Taters.  All you want.”

Katie:  “It seems like there’s an alarming inheritance-related murder mystery taking place between Georgia and Tennessee.” 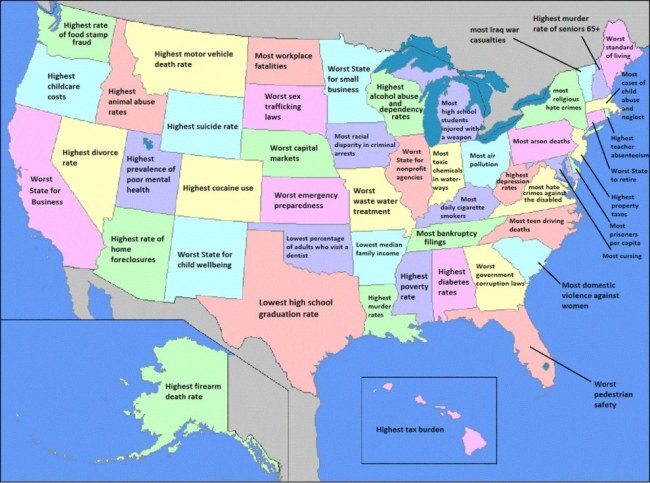 Calahan – “Oh, Texas. You’re the country’s lovable, but dumb cousin. If any state will go on to proudly display their wall of participation awards, it’ll be Texas.”

Omawarisan:  “Maryland, most cursing? I grew up there and I’m calling bullshit on that.”

Katie:  “Of course Illinois is the worst at nonprofit agencies! Without profits, how would we embezzle.”

Chowderhead:  “Wrong.  Michigan never went to road building school.  If you ever decide to move here, invest in a bicycle.  And Xanax.”

52 Comments on The Saturday Six: The United States of What?