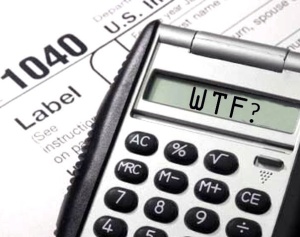 After clearing off the kitchen table and finding an outlet for the calculator, I sat down to do my taxes. As always, I made sure to have all the necessary documentation and forms — W4s, tax forms, bank statements, insurance reports, tax schedules and, most importantly, a full box of Kleenex.

As I sat staring at this year’s tax booklet, I noticed a special section of “Tax Terms,” which is an alphabetical listing of terms one may encounter during the tax preparation process. Each term is followed by a brief description meant to enlighten the truth-seeking taxpayer through “real-life” examples. For instance, the IRS uses “Jane” and “John” to illustrate the term “Ability to Pay.” In this scenario, Jane is filthy rich, with homes on both coasts that she visits by way of her own Lear jet.

By comparison, John earns what the IRS calls a “more modest salary,” which affords him a flashlight and a camper shell to live in.

The only thing these two have in common is the oil industry: Jane is an executive in it, and John had his SUV re-possessed. According to the booklet, due to their income disparity, “John and Jane do NOT pay the same amount of taxes, because their ability to pay differs vastly.”

This brings us to a term not included in the handbook: “Highly-paid tax lawyer.”

In this example, Jane is able to filter her $1.6 million earnings through a maze of tax shelters and special credits before wiring an undisclosed amount into a Swiss bank account, leaving her with a taxable income of:

John, who files his return on the 1040 EZ form, is entitled to a refund that, coincidently, adds up to exactly…

All together, there are 65 terms listed in the handbook, many of which seem self-explanatory until you read them closely. With the tax deadline just a few weeks away, I’ve taken the liberty of paraphrasing some of the more complex terms that you may encounter before now and tax day.

Gross Income: The dollar amount that appears in the box after “federal income tax withheld.”

Adjusted Really Gross Income: The amount left over after completing your taxes.

Tax Shift: According to the handbook, this is either:
a) “When one person or group is able to shift a tax they are supposed to pay to someone else.” (For a more detailed explanation, re-read the “ability to pay” portion of this column.) A Tax Shift can also be:
b) What the average taxpayer does in their seat after determining his/her adjusted gross income.

Dependent: A child, parent, spouse or household pet with a human-sounding name, such as “Fred” or “Sally,” whom the creative taxpayer can claim on his/her income taxes.

Estate Tax: The amount of tax on a deceased individual’s estate that has been passed on to surviving family members. Short explanation: Something my children will never have to worry about.

Filing Status: A spot on the IRS’s Facebook account where you write about what you’re doing right now.

Passive Income: The response most writers get when people ask them about their annual income, i.e., “Thanks, but I’ll pass.”

Flat Tax: (Hollywood, Calif., residents only) A controversial levy against any woman without breast enhancements.

Electronic Preparation H: Used only as a last resort.

Duty Deposit: What most taxpayers would like to include with their IRS payment.

While there are plenty of other terms in the new IRS tax glossary, it’s probably a good idea to stop here.

(Ned Hickson is a syndicated columnist with News Media Corporation. His first book, Humor at the Speed of Life, is available from Port Hole Publications, Amazon.com or Barnes & Noble.)

I've been a journalist and humor columnist at the Siuslaw News for 16 years. I'm also a volunteer firefighter. If the newspaper ever burns down, I will have some explaining to do. I'm married to the perfect woman, have four great kids, and a tenuous grip on my sanity...

40 Comments on Tax terms that can help cover your assets